It is hard to read about Russian imperialism and without comparing it to what I readily know about western European imperialism.* My sense of European imperialisation is characterized by the exploitation of primarily natural resources and secondarily, the exploitation of a native labor force. In the case of Russia’s annexation of Crimea and the Caucus, Buskovitch says, “Commercial motives played some role in the planning, for trade with and through Iran was assumed to be a viable path to enormous profits….” and goes on to say the lack of infrastructure meant that motive was essentially fruitless (Buskovitch, 263). Bushkovitch sounds unconvinced that trade or resources played a major role in Crimean annexation, and certainly does not suggest any commercial motives in the Finnish, Jewish, or Manchurian (except maybe the railroad). I am also unconvinced that economy played a large role in these efforts. I think looking back at Potemkin’s letter to Catherine II (1780) reveals some of the spirit that guided the militaristic expansion in the late nineteenth century:

“It is your duty to exalt the glory of Russia. Look what others have acquired without opposition: France took Corsica; the Austrians, without war, took more from the Turks in Moldavia than we did. There are no powers in Europe that would not divide Asia, Africa, and America among themselves. The acquisition of the Crimea can neither strengthen nor enrich you, but it will give you security. It will be a heavy blow, to be sure, but to whom? To the Turks! a still more compelling reason for you to act. Believe me, you will acquire immortal fame ·such as no other sovereign of Russia ever had. This glory will open the way to still further and greater glory: with the Crimea will come domination of the Black Sea; it will be in your power to blockade the Turks, to feed them or to starve them.” (Cracraft, 250).

Russia’s imperial effort was social — its purpose was to pronounce dominance and superiority over people. Similar spirit is seen in the suppression of Jewish intellectual and administrative ambition. The Russian imperialism is characterized by its militant grip on the dominance of the state — the Romanov nobility.

It does not surprise me then that Bushkovitch can account for the rise of intelligentsia and populist movements brewing in the Caucus, Ukraine, and the Kazakh.

*I feel like comparing Russia’s political and militaristic moves to Europe in a very strict sense like this does some injustice to Russian history. However, the Russian ambition to emulate the showy power of western Europe complicates this, it is almost as if Russia was begging to be compared to Europe. I am still unsure if it is a decent way to assess the nature of their imperialism.

Also, for fun, here’s a painting I found that is by Taras Shevchenko, the Ukrainian serf that bought his freedom through his creative merit and became a vocal socialist. I found out that the painting is a direct replica of a painting by a Russian artist, Karl Bryullov, who was nearly a polar opposite of Shevchenko — of privileged birth and as an adult, an aristocrat and noble. I don’t know why Shevchenko produced this exact duplicate but I think the image is interesting. 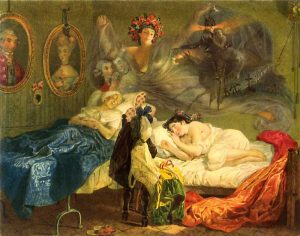 Dream of a Grandmother and Granddaughter, ~1840. Image courtesy of the exhaustive Encyclopedia of Taras Shevchenko’s Works.

This entry was posted in Uncategorized. Bookmark the permalink.